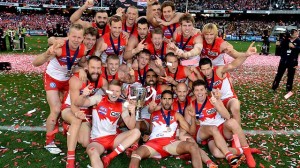 A lot of people are telling me not to change the successful Sportpunter AFL model, because it has done so well for them in the past. And I tend to agree. Our record speaks for itself. 14 years of history, and we have made over 10% ROI betting head to head, and 12% ROI betting the line. In fact the last four years alone and we have made a minimum 13% each year, up to a maximum of an incredible 21.7% last year from 154 bets. The full record is shown here.

With such amazing results, why change anything? The model is consistently profitable and amazingly accurate.

Well, I reckon I can make it even better, and on first analysis I have.

Basically I have tested for 2012, one of our greatest years and have compared the original model to the player based model. I have not included any match where GWS have played as their player information before this year was void. And the analysis was done using a hold out sample (not back testing).

Results are in. Using the old model for head to head betting, we recorded a very satisfactory 14.6% ROI and a profit of $1,871, which is not that dissimilar to our official results. However the new player based model not only bet more (46% more), but also recorded a 22% ROI for the year, and a profit of $4,129. That’s more than double.

When looking at line betting, the original model produced a $3,390 profit at 14.1% ROI. This is considerable lower than our official results as listed above. Once again this is because we rated GWS amazingly well, and profited quite a bit betting on and off them. With this analysis, they are not included for the purpose of comparing the two models.

However, the new player based model recorded 36% ROI and a $8,823 profit. Once again, more than twice as much.
But what is even more interesting is when these profits were recorded. 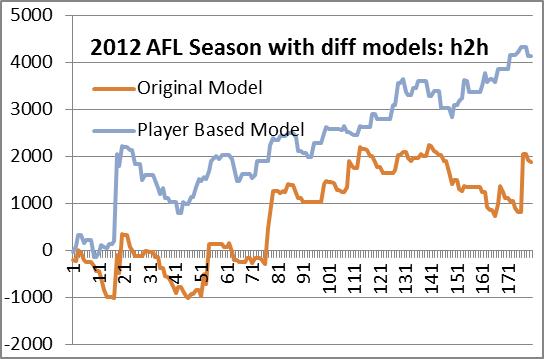 This is also shown, and perhaps more dramatically when looking at line betting graph below. Both models increase in profit during the first third of the year at equal rates, and then in the last third of the year, the player based model continues to increase, whilst the original model takes a little nose dive. Clearly the player based model excels in the latter half of the season when all sorts of injuries and rested players occur.

That being said, this is only analysis from one year. I don’t have enough player based data to do more. It also assumes that we know exactly who is in the side at the start of the game. Sometimes, this is not known until an hour or two before start time. But you can’t complain with the results!

In the next article I will outline the matches in 2012 that had the greatest difference in probabilities and show you why the bets differ from both the models.

In the meantime, you can sign up to the AFL 2013 season at this link. The price is exactly the same as last year, however note that the price will increase on the 1/3/13 to 50% more. So if you get in quick before then, then you can get the lower price.
Bring on AFL 2013 I say!