With the 2013 AFL season shortly on us, I have managed to analyse the old and new AFL models based on finishing prices as given by pinnacle sports. These are the prices shortly before the start of the match, which naturally would include any change in prices due to player inclusions and exclusions.

Before I give the details of the analysis, a few things must be mentioned. No matches involving GW Sydney or Gold Coast were included due to minimal player based data. Finals were not included due to lack of reliable data from pinnacle. Round 1 of each season (including 2011 where we won 6/6 line bets) have not been included, and there are missing odds, of which about 75% of matches are included.

Analysis on results are done using a hold out sample so there is no backtracking bias. (eg we make the models as good as possible up to the start of 2011 using only data up to the start of 2011, and see how they go in 2011 and 2012), and it must be noted that the new model is not a complete revamp of the original model but rather the old model with extra player data added on.

Once again results of the original model should not be looked at with must distaste, as the official results as shown here: http://www.sportpunter.com/result-history/afl-results/, show that line betting during this time recorded the biggest profits on record. The difference is the fact that certain teams have not been included, round1, finals and other match odds missing.

But the reality is very true, even using closing odds, the new player based model is a big improvement on the original model.

Next, we will look at the biggest differences in probabilities for some of the games, and why.

Subscriptions for the 2013 AFL season is now available. These prices will go up by 50% on the 1st of March, so get in before then. Details as shown here:  http://www.sportpunter.com/sports/afl/ 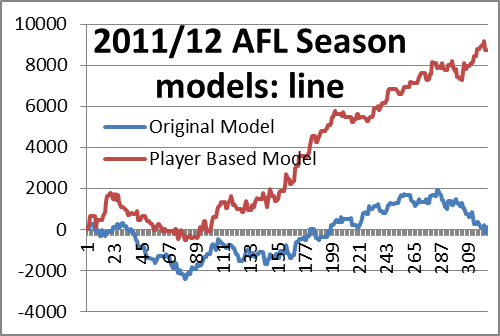