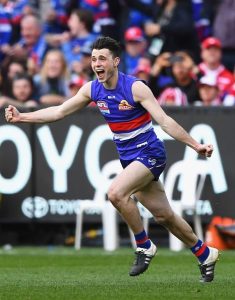 during the 2016 AFL Grand Final match between the Sydney Swans and the Western Bulldogs at Melbourne Cricket Ground on October 1, 2016 in Melbourne, Australia.

What a start to the footy season it has been with Sportpunter’s Footy Models.

Let’s take a look at the first two weeks of the AFL season.

15 bets into the AFL season, its only round 2, but already we have made a staggering 54% profit on turnover betting the line. Massive big winning bets on Richmond over Carlton, Brisbane over the Gold Coast and Essendon over Hawthorn has helped the profits roll in. Unfortunately no longer does the AFL model have a Jonathan approved Hawthorn bias, although it’s no secret that I personally wish they would win a game or two! It’s tough betting against your team and then going to the game to support them! I guess either way, I come out ahead, and you can too by following the Sportpunter AFL model which has been running since 1999. All details and betting histories here: http://www.sportpunter.com/sports/afl/

But better than that has been the NRL model. Five weeks in and we are looking at extraordinary profits. This year to date we have made 23 bets for an amazing 46% profit on turnover. These include big wins on St. George over Cronulla (3.03), South Sydney over Manly (2.13), and Manly over Sydney Roosters (3.43). In fact the NRL model has been so profitable since we introduced the player based model that it has made over 10% profit on turnover from 460 bets.

It’s not too late to sign up with plenty of the season still to come. Details and betting history here: http://www.sportpunter.com/sports/rugby-league/

But if its American sports and high turnover that takes your fancy, then take a look at Sportpunter’s NBA model. Once again the model has not failed to impress. This season we have made as expected over the years. 2.4% profit on turnover betting the h2h from 665 bets, 1.7% POT betting the line are both in line with our long term betting record going back to 2010. Totals this year however have gone amazing, making 7.2% POT from 689 bets, which takes the long term result since 2010 up to 3.1% POT from over 5000 bets. Put simply an average $1000 bet on the NBA totals alone, could have netted you just on $50,000 profit for the year to date.

Details here for the NBA: http://www.sportpunter.com/sports/basketball/nba/

Make sure you have a look at the Sportpunter footy models, and best of punting luck.
Cheers
Jonathan
www.sportpunter.com