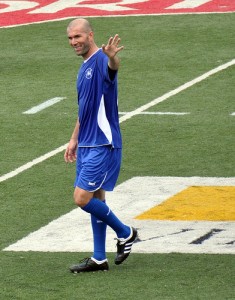 Coming in at number 7 for the best sportsperson of the last decade is French soccer champion Zinedine Zidane.

How could one possibly have a top 10 sportspeople of the decade list without a soccer player, easily the most popular sport in the world. And French legend Zidane has been the best player, in our opinion, over the span of 2000 to 2010. When most people think about more recent amazing players they start to think of the R’s; Ronaldo, Ronaldinho and Cristiano Ronaldo. Anyone would think all you need to do is name your children something similar and they are sitting on a soccer gold mine. That is probably half the reason why someone like Zidane has slipped a little under the radar for amazingly great players.

Not that any of the Ronald(inh)o’s weren’t great players, but Cristiano Ronaldo has only just started to show his skill since 2008. Ronaldinho starred from 2004 to 2006 winning multiple awards including FIFA world player of the year in 2004 and 2005, and Ronaldo would have been in the top ten for last decades top 10  players of the decade, but not this one. Only Zidane has managed to be one of the best soccer players over a long period of time this decade, from 2000 up until his retirement in 2006.

He was that big that even a film has been made about him: Zidane: A 21st Century Portrait.

However most will remember him for his last ever soccer match: The 2006 World Cup Final. Personally I was in Paris at the time, a couple of doors down from the Moulin Rouge, squashed up the back of the bar, standing on a table and someone else’s head, but had a pretty good view of the game, despite a chronically sore back the next day and a stomach full of Kronenbourg.

Zidane scored the opening goal with a penalty kick at the seventh minute mark, but Italy equalised only moments later. Zidane almost won the game in extra time, but his header was just tipped over the cross bar by the Italian goal keeper. But who will forget what happened next.

Italian defender Marco Materazzi decided to mouth off a little, and in reply Zidane turned around and head butted the Italian in the chest, knocking him to the ground. Zidane was instantly red carded for the off the ball discrepancy and because the first person ever to be sent off the field in extra time in a World Cup Final. It probably mattered little, except that he was unable to kick in the penalty goal shoot-off. But it was Zidane’s last game, and France missed out on the world cup victory.

All the people in the bar I was in exited in a flash, leaving me finally able to gasp for oxygen and stand upright. My back has never forgiven me.

However, it was an amazing finish for such an amazing player. Whilst he didn’t have the character and personality of any of the Ronald(inh)o’s, he was, in sportspunter’s opinion, the best soccer player of the last decade, and well worthy of a top ten position at number seven.