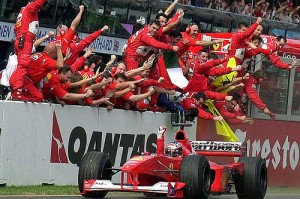 Coming in at number 6 for the best sportsperson of the last decade is German Formula One racing legend Michael Schumacher.

According to the F1 website, “Statistically, [Schumacher] is the greatest driver the sport has ever seen.” And statistically, they are quite right. Schumacher won the Formula One World Championship five years in a row in the 2000s from the year 2000 through to 2004. This takes his tally to 7 in total, 2 ahead of 1950s Argentine Juan Manuel Fangio. He has recorded 91 race wins, a staggering 40 more than next best Alain Prost, including an equal best record of 7 straight wins in a row. Schumacher holds the record for the most pole positions (68) and the most starts from the front row (115). He has the record for the most fastest laps (76) and equal record for the most fastest laps in any one season (10) shared with Kimi Räikkönen on two occasions. He has the most podium finishes (154) as well as the most podium finishes in any one season. From 30th September 2001 to 13th October 2002 he never failed to finish top 3. Schumacher has the most number of championship points (1369), well ahead of second best Alain Prost on 798.5.

It’s amazing what statistics the F1 record. Schumacher has lead in all races for a total of 5,108 laps, more than 2,000 ahead of next best Aryton Senna. On 40 occasions he had pole position and won and on 22 occasions he recorded the F1 hat trick – Pole, win and fastest lap.

Schumacher was so dominant, that in 2002 he had already won the Formula 1 World Championship with 6 races to go. So dominant he was that the sport became a little boring. Everyone knew who would win and even Ferrari made a laughing stock of it as well. At the Austrian 2002 grand prix, Schumacher’s Ferrari teammate Rubins Barrichello was in the lead for the entire race. With only a lap to go, team orders came through to Barrichello to slow down and allow Schumacher to overtake and win the race. He did, and Schumacher won. This created a lot of controversy and bookmakers even paid out on both winners. Punters might have been happy, but fans were not. Claims of unsportsmanlike behaviour were tossed around.

Later in the year Schumacher slowed down to cross the line at the same time as Barrichello. It wasn’t quite a dead heat, Barrichello won by 0.011 seconds. But it made a laughing stock of the sport, and the only people really laughing were Ferrari. Formula 1 changed the rules at the end of the season, disallowing team rules.

2005 saw more rule changes that would hinder Ferrari’s dominance. Tyres were now required to last an entire race. This meant that teams using Michelin tyres had the advantage over teams on Bridgestone. Ferrari had Bridgestone. Half way through the 2005 season Schumacher commented on the lack of horsepower in the Ferrari car:

“I don’t think I can count myself in this battle any more. It was like trying to fight with a blunted weapon…If your weapons are weak you don’t have a chance”

In 2005 and 2006, Schumacher finished third and second respectively and was even accused and punished of unsportsmanlike like behaviour at the Monaco grand prix when attempting to slow down the lap times of arch rival Fernando Alonso by moving his car onto the race track during Alonso’s qualifying lap.

Schumacher retired at the end of the 2006 season, but there have always been rumours about him racing again. Despite some late mishaps, Michael Schumacher dominated the sport so much that rule changes had to be implemented to curve it.

Michael Schumacher is well worthy to be on the list of top 10 sportspeople of the decade, but will there be any other motorsport people on the list? Valentino Rossi perhaps, or maybe Sebastian Loeb?

And just in case you were wondering, as romantic as it would be, Michael Schumacher is not the stig!

7 Responses to Top 10 sportspeople of the 2000s: 6. Michael Schumacher