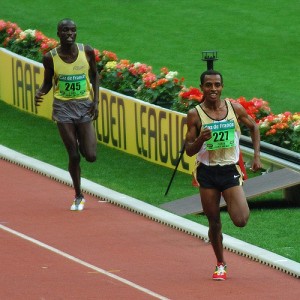 Coming in at number 9 for the best sportsperson of the last decade is Ethiopian Kenenisa Bekele. Ever since the movie The gods must be crazy did the world wake up to the fact that the Africans have a special ability to run, run quick, and run very long distances. In the 1990’s, Ethiopian long distance runner Haile Gebrselassie made himself an instant star, climaxing to his victory at the Sydney Olympics; the third person in history to defend his gold medal at the 10,000 meters. A massive feat it was, and many claimed Gebrselassie to be the greatest long distance track runner of all time.

So why all the talk about Gebrselassie when it is his fellow countryman Bekele who has been nominated at number 9 for the best sportsperson of the last decade? That is because Bekele didn’t just match Gebrselassie’s amazing record, he managed to beat it.

An amazing record. Even at 5,000 meters he is unbeaten in the last couple of years winning the 2008 Beijing Olympic games, and 2009 Berlin World Championships. Only five people before him had won the 5,000/10,000 meter double at an Olympic games.

Bekele is the most accomplished runner in IAAF World Cross County Championships history with 6 long (12,000 meters) and five short (4,000 meters) titles and was the cross country champion in years 2002 to 2006 and 2008. From 2002 to 2006 Bekele won both the short and long distance race, events that were held in Dublin, Avenches, Brussels, Saint-Étienne and Fukuoka.

Bekele had a setback in 2005 when his fiancée, Alem Techale, a fellow long distance runner, died of a heart attack while training. This death queried many to believe that Bekele might have been involving himself with performance enhancing drugs, however never has Bekele been implemented. It did however effect his running for a short time. After grieving for a month he lost his next two short distance runs. In the later indoor 3,000 meters he lost by sprinting to the finish line one lap too early.

It didn’t take him long to regain composure, just a couple of months after his fiancée’s death Bekele won both the short and long distance world cross country championships.

In 2009 Bekele became the first person in history to take out both long distance victories in the Berlin World Championships. Take a look at the 10,000 meter victory below.

Bekele would have to be arguably the greatest long distance runner of all time. But is it enough to be higher on the list than Usain Bolt? Perhaps Cathy Freeman will make the top 10 sportspeople of the last decade? Voice your opinion in the comments below.