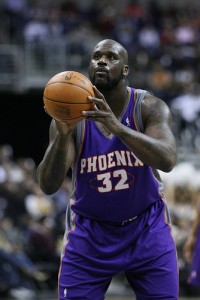 Coming in at number 10 for the best sportsperson of the last decade is American Basketball Player Shaquille O’Neal. No player in basketball has had the same influence as the “shaq” in the past ten years. Standing at a daunting 7 foot 1 (216 cm) and weighing 325 pounds (147kg), the shaq is one of the biggest players to play the game. Starting the 2000s playing for the LA Lakers, he took them to championships in the first three years of the decade, winning himself NBA Finals MVP in all three years and regular season MVP in the year 2000. His regular season MVP win in 2000 was just one vote off being the first unanimous MVP win in NBA history.

In 2004 he was traded to Miami heat, a move in which O’Neil specifically said that he was to bring them their first NBA Championship. It didn’t happen straight away, but in 2006 the Miami heat recorded their first ever NBA Championship. O’Neil finished the 2006 season as league leader in field goal percentage, equalling Wilt Chamberlains record of obtaining this feat nine times.

Shaquille O’Neal might well have been higher up the list, if it wasn’t for his very forgettable “music career” that spanned five albums.

And tomorrow, we will give you number 9.

Who do you think should be number ten on the list? Should Shaquille O’Neal be higher or lower than fellow basketballers Tim Duncan and Kobe Bryant? Make a comment on your opinion below.